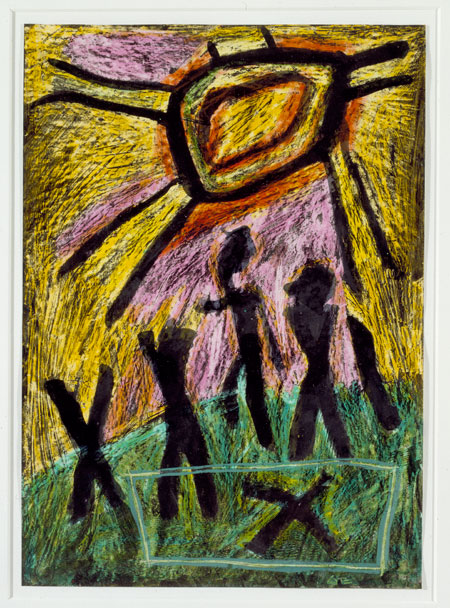 African Cosmos comes to a close this weekend, and after months of becoming entrenched in the world of cultural astronomy and the strong field of astronomy across Africa today, I find the questions posed by the exhibit—and by the artists featured in the exhibit—still resonant. What exists beyond the Earth, and in what way does it impact us? How can we capture our curiosity & awe of the sky and use it as a connection to ourselves and others? Cultural connections to the cosmos have been found among groups across Africa and beyond, and these connections will certainly continue on into the future.
Though it’s hard to pick a favorite piece in this exhibition, one small, perhaps easy to miss, untitled work (above) by South African Garth Erasmus continues to draw my attention and spark a sense of connection.  How many of us have stood underneath the sun, looking upward in search of something? The work of Erasmus presents a story of wonderment common to us all.

Our guest post this week is by South African artist Marcus Neustetter, whose work is featured in the African Cosmos exhibition.  To see his work, visit: http://www.marcusneustetter.com/

My Room at the Centre of the Universe from Africa meets Africa on Vimeo.

In early 2012, Helene Smuts, director of the Africa meets Africa Project, invited a group of artists to join the production team of the latest in its series of educator resource books and films. The Africa meets Africa (AmA) project is an independent NGO which explores and documents southern African cultural heritage, seeking out solutions to contemporary learning problems in our schools by looking to the sophisticated visual language of traditional arts styles. An interdisciplinary research process has led to remarkably pragmatic learning solutions – such as presenting mathematical concepts in relation to the sophisticated symmetries of woven grass baskets and beaded adornments familiar to rural learners. The project stimulates critical thinking around the fluidity of ethnicity in its flow between urban and rural contexts

My Room at the Centre of the Universe is a 12 minute preview of a 60 minute film being directed by regular AmA film maker Guy Spiller. Together with a richly illustrated resource book, it departs from the act of sensitive and intensive observation common to the fields of astronomy, archaeology and the visual arts. A small Karoo farm outhouse becomes a space of contemplation and creativity for the main character, a 16 year old teenager from Sutherland. One small window in his room acts as a framing device through which he observes and contemplates the landscape, the skies, and ultimately the universe– much like telescopes used by physicists, or the views the Hubble telescope offers humankind.

Our guest post this week is by Matthew V. Cassetta, a foreign affairs officer and collector of islands & African stamps. 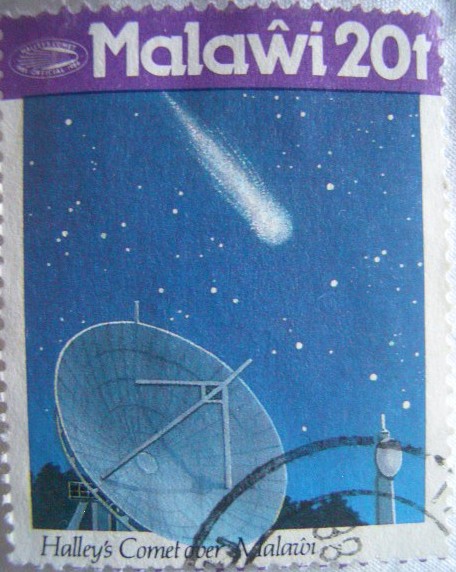 Historical evidence has shown us that ancient Africans studied the sky and formed theories and tales to explain its mysteries, leaving enduring myths and calendars as well as megalithic sites that have changed our views of how the ancestors of modern Africans related to their cosmos.  Other contributors to this blog have provided accounts of significant African sites such as Nabta Playa in southern Egypt, and Ng’amoritung’a on the shores of Lake Turkana in Kenya, whose calendars charted the Earth’s alignments with the Sun and the movements of the stars.  We can only wonder what exciting new discoveries await archaelogists and historians on the continent as their research progresses.
Philately presents us with a rich tapestry of images selected by independent African nations to celebrate some of the astrological wonders observed by their societies.  Such stamp issues fall into two main categories: stamps that depict astronomical discovery, often by recognizable scientists; and stamp issues that depict the natural phenomena of the cosmos, giving hints to how ancient peoples may have viewed phenomena such as meteors, constellations, and planetary movements. 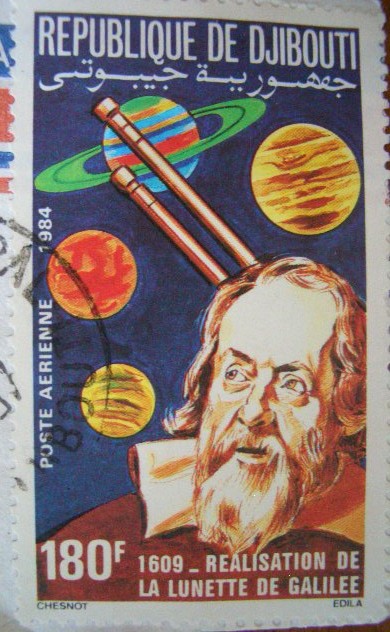 Researchers and scientists have unraveled the mysteries of the cosmos over time like a puzzle, finding new stars and planets with ever-more powerful instruments.  Several African postal authorities have honored such scientists as Galileo and Copernicus, as well as the discoveries they have uncovered.  Djibouti issued a 1984 airmail issue (left) to commemorate the successful creation of Galileo’s telescope prototype in 1609, which allowed him to see and document elements such as sunspots, the phases of Venus and the satellites of Jupiter.  Modern scientific advances have also been celebrated on African stamps, such as Mali’s issuance of a 1980 airmail stamp (below) celebrating the 50th anniversary of the discovery of Pluto, which made headlines around the globe when announced by Clyde Tombaugh at the Lowell Observatory in March 1930. 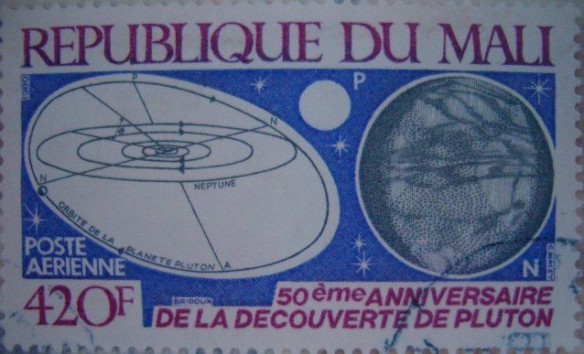 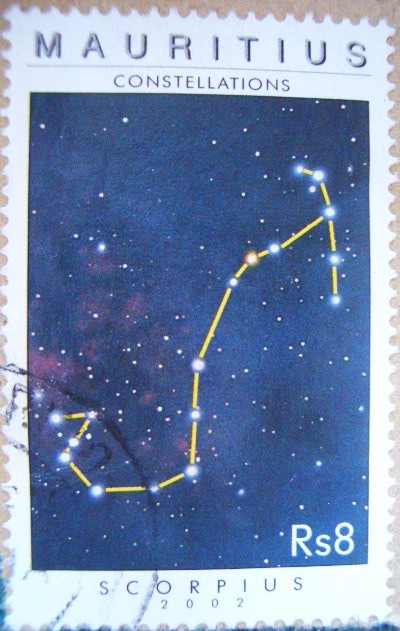 Perhaps the most enduring images however, are those of the phenomena that delight societies who look up at the night skies and marvel at what they see.  Constellations of stars have been the subject of many stamp issues, and most recently from African nations such as Namibia and Mauritius.  Pictured here (right) is one such image from a 2002 set of Mauritius showing the pattern of stars which make up the Scorpius sign (others in the set show the constellations Orion, Sagittarius and Crux). 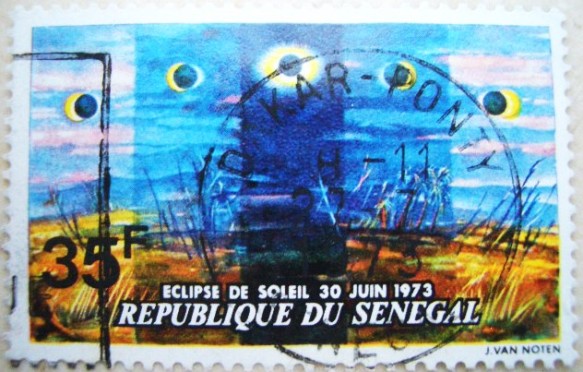 Eclipses and comets are also popular themes which have been depicted on recent African stamp issues.  These images reflect the wonder that these events inspire in those that look on them from below, and connect modern societies with their anscestors who passed down tales and legends inspired by similar phenomena.  One very beautiful example can bee seen on a 1973 issue by Senegal (above) showing the dramatic phases of light and dark over the local landscape, produced by a total solar eclipse that ocurred on June 30 of that year.  Similarly, nations across Africa and the globe featured the March 6, 1986 passing of Halley’s comet on many local stamp issues.  Pictured at the beginning of this post is one from Malawi, showing the comet passing through the starry night sky over the country.  The much-celebrated passing of Halley’s comet occurs just once every 75 years and inspired skygazers worldwide to witness this thrilling and rare occurrence.
Astronomy on the African continent evokes rich traditions and proud historical achievements.  We can expect new generations of African researchers to take research and discovery to exciting new heights and to uncover further clues and evidence to how ancient cultures related to the cosmos. 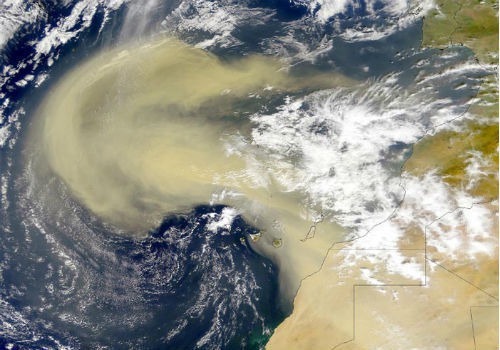 Teens at the Smithsonian’s ARTLAB+ produced and recorded a series of interviews with our own Chris Kreamer, curator of the African Cosmos exhibition, South African artist Willem Boshoff, and astrophysicists at the Smithsonian Astrophysical Observatory. Check out the third in this series of interviews below, which highlights South African artist Willem Boshoff, whose work is featured in the exhibition: 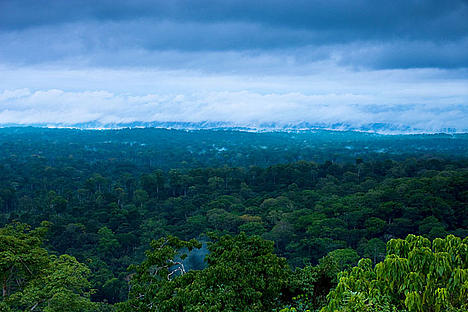 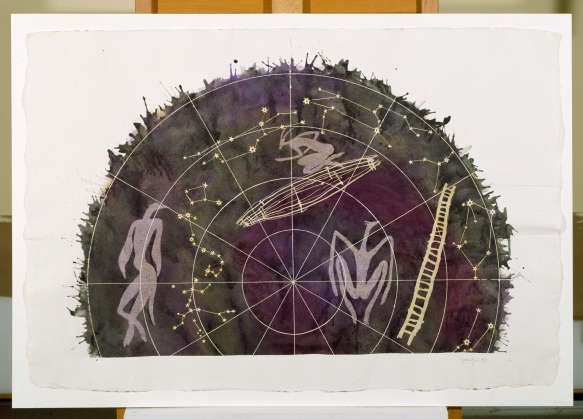 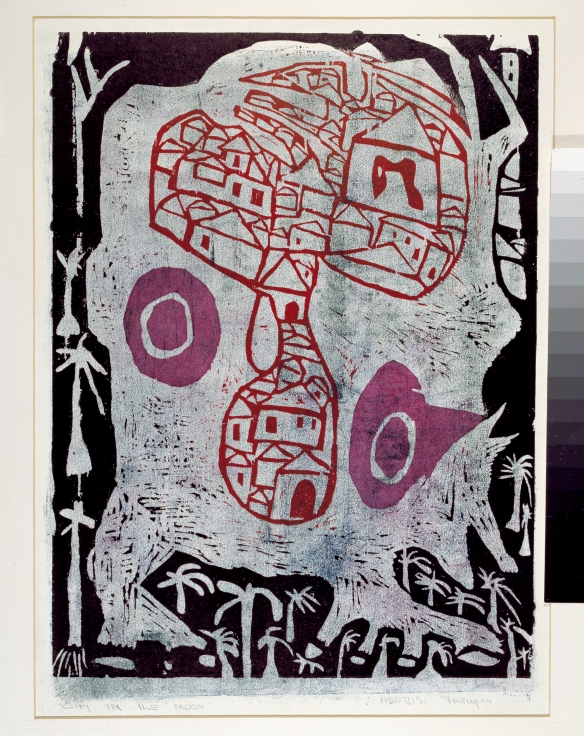 END_OF_DOCUMENT_TOKEN_TO_BE_REPLACED

Our guest post this week is by South African artist Marcus Neustetter, whose work is featured in the African Cosmos exhibition.  To see his work, visit: http://www.marcusneustetter.com/

On the invitation of the South African Post office to design a stamp series celebrating South Africa’s role in astronomy, I further developed my existing research and network at the intersection of art science and technology. My contribution was beyond the designing of the stamps, to negotiating the inclusion of various agencies and facilities, as well as acknowledging the traditional history and astronomical societies that make the local approach to astronomy rich and layered. 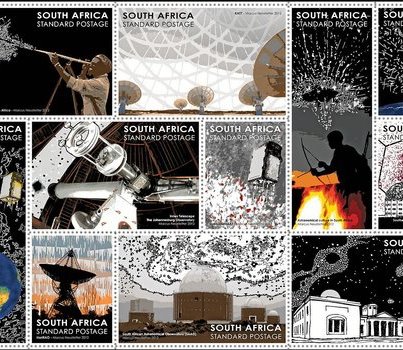 While I was focused on designing each stamp and the first day covers to be both accessible and artistic in conceptual approach and execution, a few key elements maintained throughout the design process. I wanted to work with the technology of the stamp, which resulted in the perforated stamp sheet, the foiling, that echoes the mirroring of the technology used in most of star observation– integrating my own drawings into a dialogue with the facilities, agencies, or represented data.

The marks, drawn in the dark while observing the space between the stars in the night sky of Sutherland in the Karoo region, and data collected from the different observatories, has informed the representation of what I like to call the unexplainable, the unknown, the imaginary, the magic.

For more information and a closer look at the stamp series, click here. 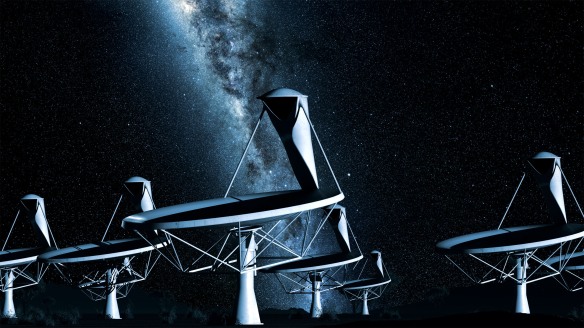